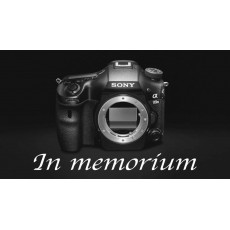 By James Artaius about 19 hours ago

Sony's A-mount system has finally been Old Yellered, as the last cameras have been removed from its website

Sony has quietly put the final nail in the coffin of its A-mount camera system, as the last remaining DSLRs have been removed from its website – and have correspondingly been listed as discontinued by retailers.

At the end of April, it seems that Sony calmly led the Sony A99 II, Sony A77 II and Sony A68 cameras into the back yard and gave them the Old Yeller treatment, delisting them from the interchangeable lens cameras on the company website.

Concurrently, the A99 II was also listed as "no longer available" on sites like B&H, where its siblings were already long gone (as spotted by Sony Alpha Rumors).

The news comes as little surprise, since the Sony A99 II was the last A-mount camera released – and that was way back in 2016. While Sony stated in 2017 that it would continue to develop A-mount bodies and lenses, the writing has been on the wall for the system for some time.

Indeed, the last A-mount-related development came last year, when the manufacturer announced the Sony LA-EA5 mount adapter to use A-mount lenses on E-mount camera bodies with the best performance (including phase detect autofocus and real-time Eye AF for humans and animals).

This, it seems, was the last bridge to get A-mount users to cross over to the mirrorless realm.

It marks a sad but inevitable end for Sony's DSLR era. The A99 II is still a formidable camera, boasting a 42.4MP image sensor, 4K video, phase detect AF and 12fps continuous burst shooting, all of which gave the Canon EOS-1D X Mark II and Nikon D5 a run for their money. Of course, it's no match for today's Sony A1, Sony A9 II, Canon EOS-1D X Mark III or Nikon D6.

Every dog has its day, though, and in 2021 that day came for the A99 II and the A-mount. Thanks for the memories!